"I have read the RP Rules and agree to follow those rules or accept the judgement of the administration for any infractions I may cause. If I have any concerns or questions, I understand to refer to the aforementioned regulations or ask the staff before proceeding further. I understand that I am responsible for my character's information and actions in the story."
~ Dellindis ~Release Forms and Techniques~
--Hollow Form--
Hollow Form Abilities:
--Passive Abilities--
Hollow scarf defense:The scarf he normally wears has two functions with why he keeps it on him always apart from simply hiding his more hollow features.
First is its automatic defence where the scarf itself immediately moves to intercept any type of hand to hand blow sent to his upper body due to the fact it is made from his own scales from when he was a vasto lorde it is able to block upto basic kido enhanced hand to hand,
The second function of it is when he wraps it around his head it functions like a gas mask to filter out poisons

Resurrecion Abilities:
--Passive Abilities--
Enhanced hierro/Dragon scales. Due to the dragon influence of his release Along with the usual hierro that he posses he has scales stretching from his shoulders to his fingers,along with scales covering his neck and legs meant to aid in his close quarters combat.in essence they are able to clash with zanpakuto's and their like but wont hold a counter to any kind of power blows. This is also the main defense of his wings that he uses as shields..i dont know where this rates on ability's if its advanced or superior.
--Basic Abilities-- 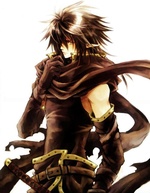