A highly advanced release state that goes beyond the original Resurreccion state available to hollows, Segunda Etapa further amplifies a hollow's abilities, making them vastly more powerful than before. It is difficult to achieve, let alone master, but can be a very dangerous thing for opponents to have to face alone.

To even think of achieving this state is to have achieved rank 15 and have mastered one's Resurreccion. Segunda Etapa can be difficult at first to master, and the hollow in question must train in attaining and sustaining this state for three days. (5 posts of training devoted to learning Segunda Etapa.)

Notes:
Note I: Stat Boosts apply a +1 to any specific stat, may stack.

Note II: The Stamina Boost allows techs to be used more often. It essentially cuts down the stamina cost of techs, with the exception of anything more powerful than Cero Oscuras, including, but not limited to, ultimate techniques and highly potent superior techs.

Note III: The Segunda Unique Superior Tech is an upgraded version of a technique of any rank of your choice, such as Cero Oscuras, Hierro, or one of your own custom techniques. It must mimick or be based off one of your techniques. Furthermore, regardless of that tech's rank, this tech is Superior ranked, and is just as draining and powerful. This tech can only be used once in a battle. (And if it lasts for a time, like with Hierro, it can only be used for no more than 1 post.)

Note IV: All boosts only apply while in Resureccion: Segunda Etapa.

Note V: The Tech Boost applies a 1.5x boost to any non-superior or Ultimate-ranked tech or ability.

Para Facultar:
--Para Facultar--
A brief powerup state that is unlocked for Hollows that have mastered Segunda Etapa. By pushing themselves to their limits, they can bring out that much more strength to their battle, though the endeavour tends to leave the Hollow drained afterwords.

+100 Reishi
+1 Stat Boost
Ceros boosted by 1.5x (Stacks with Tech Boost)
Lasts for six posts
Can only be used once
Removes 200 Reishi and 2 Stamina, as well as all bonuses acquired from Para Facultar, upon completion.

Final Notes & Mastery:
--Final Notes & Mastery--
Segunda Etapa gains points via 1 point for entering it, and 1 point for each Segunda tech or Superior Ranked technique used while in that state. Full mastery can only be obtained via learning and using your Segunda's Ultimate Technique in a topic lasting at least ten posts.  (Nothing special here, really. Just straightforward levelling up.)

You all should know the consequences of lying about your points and stages. Follow the rules or you will be completely reset. 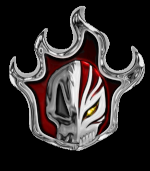